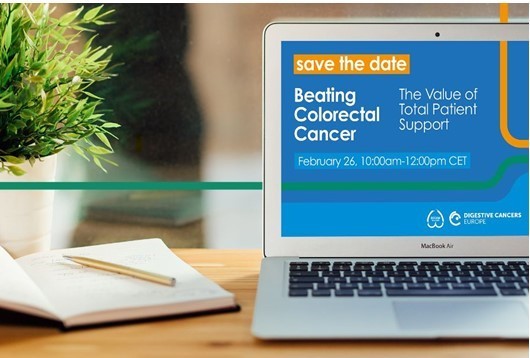 Colorectal cancer, sometimes referred to as bowel cancer, is Europe’s second deadliest cancer. Every year, 400,000 citizens in the European Union get a diagnosis of colorectal cancer and every year 180,000 citizens in the European Union die because of it. We see these as the most avoidable deaths in the EU. Europe’s second deadliest cancer doesn’t have to be a killer. There’s a simple screening test for detecting it early, which gives patients a 90% chance of survival.

In February 2000, President Clinton officially dedicated March as National Colorectal Cancer Awareness Month. Since then, it has grown to be a rallying point for the colorectal cancer community where thousands of patients, survivors, caregivers and advocates throughout the country join together to spread colorectal cancer awareness by wearing blue, holding fundraising and education events, talking to friends and family about screening and so much more.

In this framework, the Digestive Cancers Europe (DiCE), the European umbrella organisation of a large group of national Members is organising for the next February 26th, 10:00 am – 12:00 pm, the launch event of the European Colorectal Cancer Awareness Month with:

This project has received funding from the European Union’s Horizon 2020 research and innovation programme under grant agreement No 848098”.

We use cookies to make sure you can have the best experience on our site. If you continue to use this site we will assume that you are happy with it.AcceptCookie policy